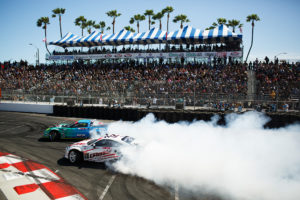 “We are excited to have the Razo d’Action 360 dash camera on-board Ken’s car for the 2019 Formula Drift season” said Junpei Tomonaga, President & CEO of Razo / CarMate U.S.A. “Our new 360-degree dash camera helps drivers record what is occurring in front and around them while driving, all with a single device”. “We can’t wait to see some of the tandem battle footage that the d’Action 360 camera will capture this season!”.

RAZO recently launched d’Action 360, a new dash camera that captures front, rear and side footage with a single lens. The camera allows users to view footage real time on their smartphone or later on their PC. The camera has been instrumental in capturing traffic incidents and monitoring in-car situations.  The camera and optional accessories are available on RAZO-USA.com or Amazon.

Formula Drift is the world’s premier drifting series is entering its sixteenth season. The 2019 Formula DRIFT series kicks off on April 5-6 on the streets of Long Beach.

“I can’t wait to share some of the amazing 360-degree footage that I have been capturing with the new d’Action 360 camera” said Ken Gushi.  “The footage is amazing, and I love that the camera records my speed and track location with the built in GPS”

RAZO has been designing and manufacturing premium automotive parts and accessories for more than 50 year.  Providing its customers with innovative products that are built with the highest quality materials. Its full time R&D department is dedicated to producing only the highest-level motorsports equipment and accessories.  RAZO is actively involved with motorsports and is constantly putting its products to the test.  Working closely with its test drivers both on and off the track RAZO is always in search of ways to improve its products. RAZO’s objective is simple:  Create top-quality performance products that are innovative and functional for fellow motoring enthusiasts.